All gigs until at least end of July 2020 are cancelled due to the COVID-19 pandemic. We are trying to postpone as many shows as possible.

The Franklys, The Ghost Wolves and the Restarts on tour

Three tours of the three amazing bands The Franklys, The Ghost Wolves and The Restarts will start soon!

New releases by The Restarts and Subhumans

London’s Punkrock three piece The Restarts will release the album ‘Uprising’ via Pirates Press Records based in Oakland on October 25th who also released The Subhumans’  brand new record “Crisis Point” and a 7inch split including both bands.  The first song ‘Black Dog’ can already be heard here. They have a slew of exciting teasers coming out leading up to the launch party, a very exciting selection of current punk rock reprobates for your discerning pleasures! The record release party will take place at the New Cross Inn, with 5 other bands who celebrate Punkrock.

The Subhumans and the Autogramm tour both start on July 19th! Also IDestroy will come over for two shows this weekend:

“Autogramm is not afraid to show their influence and their influence is that exact point where Punk and New Wave merged in 1978. Taking the minimalist hooks from the Cars and the slightly sinister buzz of Tubeway Army, Autogramm crank out a catchy number that not only would fit right at home on an I love the ‘80s soundtrack, but would also put about half of the songs on that tape to shame.”
– John Gentile, Punknews, NYC

“Considering how long this band have been going it’s incredible how much energy they still display when they play live. Frontman and lyricist Dick Lucas is still an absolute inspiration. Somehow he doesn’t seem to have aged a bit proving that the anarcho punk lifestyle is obviously good for your health. Incredible band.”
– Caughtinthecrossfire.com

The Jenny Don’t And The Spurs Europe tour is fully booked! No day off!

Jenny Don’t and the Spurs are Portland’s hottest new roots-country four piece. Featuring Jenny Don’t, Kelly Halliburton (P.R.O.B.L.E.M.S., Pierced Arrows), Christopher March and Sam Henry (Wipers), Jenny Don’t and the Spurs bring a variety of musical styles and a formidable wealth of experience to the stage. Drawing from a long background of playing in some of Portlands best and most well known independent bands.

The Dizzy Brains from Madagascar will tour through Europe and play some great festivals this year! Don’t miss them.

The Dizzy Brains are a garage rock band, inspired by The Sonics, as there are many around the world, except for Madagascar, one of the poorest and most corrupt countries in the world and the birthplace of the quartet. Founded by two brothers, Eddy on vocals and Mahefa on bass, the group fights injustice, lack of possibilities and freedom restriction in the everyday life of the islanders. Their passion for life shines off during their concerts.

Turbo Booking is proud to work with IDestroy. It’s no secret that the three girls love to play live and throw every last drop of energy into doing so. In their short time together they have nearly 200 gigs under their belt. From big stages such as Bristol Pride and Rebellion Festival to acoustic sessions for BBC introducing, Sofar Sounds and Glastonbury Festival, proving there’s not a single thing that can faze them. Their 2019 Europe tour guarantees to be a hell of a lot of fun and most importantly, loud!

Happy New Year!
After a small break Turbo Booking is back in 2019 with booking festivals, shows and tours for the following lovely artists:

Jenny Don’t and the Spurs (US)

Alternative Country from Portland with members of Pierced Arrows and The Wipers
Europe: June/July 2019

The Subhumans June tour with the last show yesterday at the Fusion festival was fantastic!! Big thanks to the local promoters and all the people who came to the shows! The Ghost Wolves are still on tour in Italy and Germany and also had a wonderful show at the Fusion on Saturday. 🙂

Agrotóxico from Brasil will tour Europe in July and August and play some great festivals like the Obscene Extreme, the Ieperfest, the Rebellion and the Refuse festival.

The Subhumans and the Ghost Wolves are back! 🙂

The Dizzy Brains from Madagascar

The Dizzy Brains will come over soon! The exceptional garage band from Madagascar will tour through Germany and the Netherlands – don’t miss them!

The Subhumans tour starts tomorrow! The punk rock legends will tour through Germany, Switzerland, the Netherlands, Belgium and France – all booked by Turbo Booking.

The Ghost Wolves tour through Germany, France and Spain is going great. They will be back in June/July for a some festivals and club shows!

Next month Detroit 442 will tour Germany, Czech Republic, Austria and Switzerland, followed by the legendary Subhumans who will play festivals and clubs shows in Germany, the Netherlands, Belgium, Switzerland, Austria and France. After their tour in March the Subhumans will be back at the end of June!

In May The Dizzy Brains from Madagascar will tour the first time in Germany and the Netherlands. They will come back for festivals in summer and more club shows in September. You don’t want to miss them!

The Restarts will finally be back for a tour and they bring their friends Krass Kepala from Indonesia for 15 shows and festivals in Germany, the Netherlands, Austria, Switzerland, Italy and Slovenia!

In Summer we are looking forward to the Subhumans tour part II in 2018 and to finally see Sects Tape from Belgium and Pete Bentham and the Dinner Ladies from England again, followed by a lengthy tour from our friends Agrotóxico from Brasil in July/August and also Defiance from Portland, USA (yes, really!) for a few days around the Pod Parou festival in Czech Republic.

The amazing IDEAL tribute band Schöne Frau mit Geld and also my friends F*cking Angry from Bonn will tour as much as they can in 2018 and everybody is looking forward to that as well!

This year started really bad. Jonny, the very talented P.R.O.B.L.E.M.S. singer and former actor and vegan restaurant owner and above all the nicest guy you can imagine, died yesterday. He has certainly experienced a lot in his 33 years, but he died far too young. We will all miss you, Jonny. 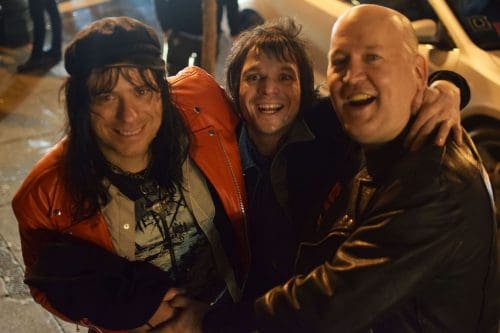 “It is with heavy hearts and saddened minds that we announce the passing of our dear friend and singer Jonny Jewels, AKA Jon Paul Steuer. The addition of Jonny to our dysfunctional band family was one of the best choices that we have ever made, and he brought a much needed sense of fun and lightheartedness to everything we did. He was only with us for a little more than a year, but we managed to cram a lifetime of great experiences into his tenure as our singer: dozens shows at home in Portland and across several states, an amazing European tour, and our best full-length release yet.
We’ve lost our singer, but far, far more than that we’ve lost a friend.
Rest in peace, Jonny…we love you.
Jon Paul Steuer March 27, 1984 – January 1, 2018″
– P.R.O.B.L.E.M.S. – 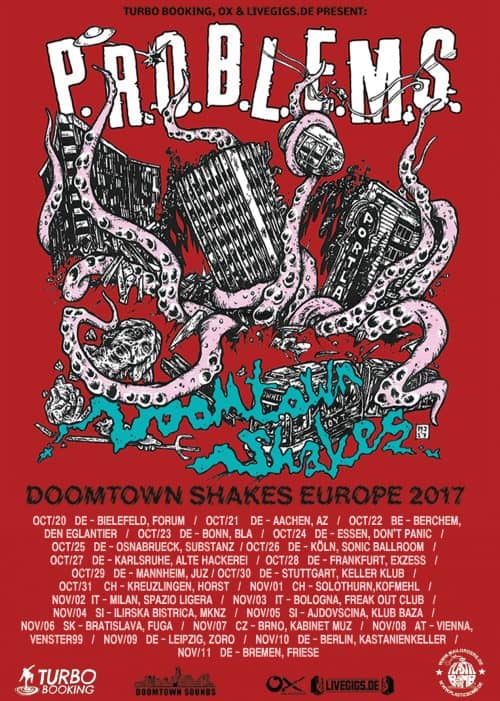 With their second full length album, TEXA$ PLATINUM (Hound Gawd Records) the Ghost Wolves did 23 Europe shows in 23 days in spring and it was glorious. Now they will be opening a lengthy tour of Europe, The U.K., Ireland and Scandinavia for the Nashville based badasses All Them Witches. Before that they will play 6 shows in Bern, Stuttgart, Cologne, Dortmund, Lübeck and Leipzig, starting on Monday, September 11th!

The Don’t tour starts tomorrow in Kiel! 24 shows in 24 days, in Germany, Netherlands, France and Switzerland. Featuring Jenny Don’t with members of the Wipers, Poison Idea, Pierced Arrows and the Problems!

The brand new Jenny Don’t and the Spurs video is available online! All filmed in Portland, Oregon. Written, directed and filmed by Scott Ballard. If you ask me, he is a genius!. 🙂