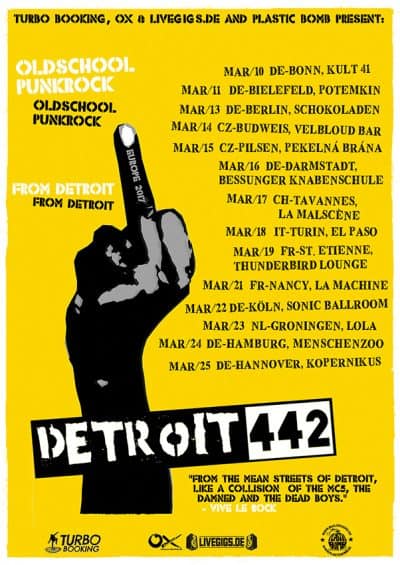 The Subhumans (UK) will be on tour in 2017 in Germany, Netherlands and Belgium:

The Anarcho Punk legend Subhumans will tour in February 2017 in Germany and the Netherlands followed by lots of festivals in summer in whole Europe.

Dominik from Canal Terror and Molotow Soda is the new guitarist for the popular punk band F*cking Angry from Bonn, Germany (Rilrec). They will play as much as they can in 2017!

Detroit 442 (angry oldschool punkrock from Detroit, one of the most violent cities in the world) will tour Europe in March 2017.

After her successfull first tour with a full band Louise Distras will come back with her girls and boys in April/May 2017.

Pete Bentham and the Dinner Ladies are back! After a small break the only Kitchen core band in the world will be back in April 2017 with their new 4 track vinyl EP “Pychedelic Village” (Antipop Records)!

The Ghost Wolves from Texas were signed by Hound Gawd! Records (Berlin, Germany) and will publish their new album “Texas Platinum” in spring 2017, followed by a 3-week European tour.

I can’t believe that the Jenny Don’t And The Spurs and the Louise Distras tour both are over. But Jenny will come back in May/June with Don’t (including their new band member Eric “Vegetable” Olson from Poison Idea) and also Louise will come back in April with her band! 🙂
Thank you very much, people, who organized shows, people, who promoted shows and people, who came and enjoyed these two amazing bands!

Don’t be sad when the summer is over – because in fall the wonderful singer-songwriter Louise Distras will tour with a full band in Europe! Louise Distras channels her anger, hopes and fears into anthems of love and fury for yet another let down generation. Ticking both the post-punk and pop boxes with explosive lyrics and riotous sonic disposition, Distras’ live shows are “high energy face rippers that stand out like a meteor”.

Cheetah Chrome and the Knobs

Exciting news! Cheetah Chrome, the original Dead Boys guitarist, will come to Europe for a few shows in August and then again in October 2016! Turbo Booking is happy to help. 🙂

Cheetah Chrome’s explosive songwriting and raw tone influenced an entire generation of players and has been reflected in some most revered and popular bands including The Hellacopters, The Darkness, Powder Monkeys or Supersuckers.
From cutting his chops and being an architect for the US punk rock sound in Cleveland, Ohio with Rocket from The Tombs to relocating to New York City as a founding member of one of the most prolific punk rock bands of the genre, The Dead Boys.

Portland’s hottest new roots-country four piece “Jenny Don’t and the Spurs” will come back to Europe after only six months, because we all had too much fun with the country experience! Featuring Jenny Don’t (Don’t, Ladies Of The Night), Kelly Halliburton (P.R.O.B.L.E.M.S., Pierced Arrows), JT Halmfilst (Thee Headliners, Audios Amigos) and Sam Henry (Wipers, Rats, Napalm Beach, Don’t)! While the sound of the Spurs is original and draws from deep wells of personal experience, the band pays stylistic homage to the greats of the genre – Patsy Cline, Ernest Tubb, Hank Williams Sr., Loretta Lynne, and all the rest of the real players from the 1940s and 50s…

The first 5 tours are over

The first five tours in 2016 are over. THANK YOU, P.R.O.B.L.E.M.S., Don’t, Jenny Don’t And The Spurs, Feral Kizzy, THE Veggers and Reddot! You are wonderful people and fantastic musicians and I love working with all of you! Come back soon, please!
In May I will be on tour in Germany, Switzerland and France with the Dead Buttons from Seoul! 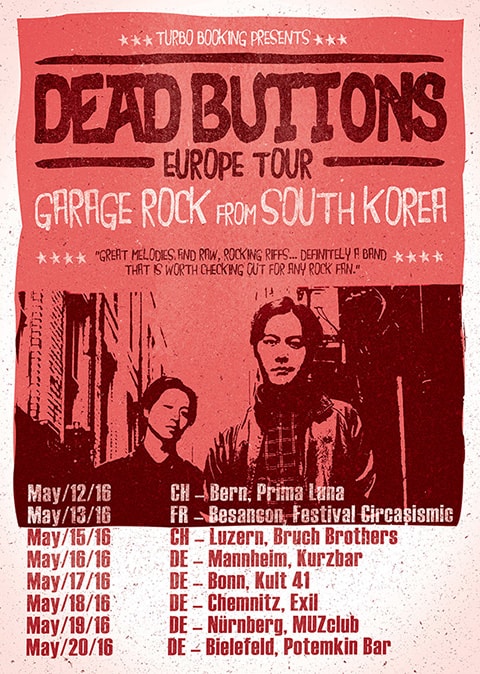 Thank you all for organizing and watching the alltogether 63 shows of Don’t and the P.R.O.B.L.E.M.S. from January till March! Luckily Jenny (Don’t), Kelly (P.R.O.B.L.E.M.S., Dead Moon etc.) and Sam (Don’t, Ex-Wipers) are staying for 19 more shows with their fantastic roots country band Jenny Don’t and the Spurs! 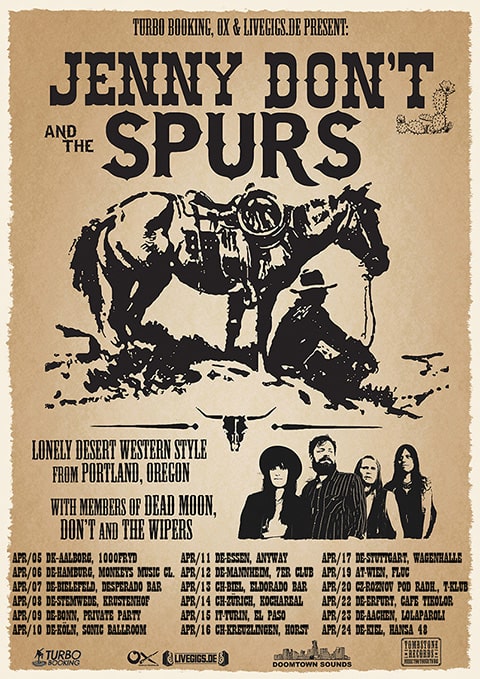