Sheepy from Liverpool play pop punk with mega catchy songs, tight hooks and lovely harmonies. Since 2012 the band toured across the UK, Ireland and Europe.

Songwriter Luke Jones recorded 12 self-produced albums before teaming up with Blang Records. "Predator EP" was the first release, followed by the singles "Glum" and the 7" "Another Day". These songs received national radio airplay on the likes of BBC Radio Two, 6 Music, XFM, plus some national TV play on Soccer AM.

The debut self-titled album was released in January 2014, featuring the well acclaimed singles "These Clothes" and "Don't Know Much". "Wild" EP was released in June 2015, and the single "Wild" was played on XFM and BBC Introducing.


“...effortlessly melodic and insatiably moreish… lo-fi, powerpop and post-punk with a massive pop heart beating at the centre.”
- Sounds XP


“Undertones aura with merest whiff of Nirvana, crumbs of Costello and a few milligrams of Monkees...”
- Mudkiss


"Sheepy, the Liverpool based 3pc who demonstrate that pop music does not have to be the bland, genre void pap that clogs up the charts. With ‘Alarm Bells’ they have abandoned the blueprint, and crafted an album of dark-pop with a luxuriously unsettling edge... Sheepy have a created an energetic short, sharp joyously off kilter belter that should be worthy of your attention."
- Louder than War


"The third single ‘Another Day’ was played thirteen times on BBC 6music, including seven spins from Steve Lamacq alone... having listened to this a good few times trying to find reference points, similarities and the like I have come up with a hotchpotch of names, some dating back to the 60’s, others more recent – I noted down The Kinks, Buzzcocks, The Undertones, The La’s/Brit/Indie pop, perhaps TFC, hints of psychedelia and even The Ramones… The entire album is a kaleidoscopic mix of pops finest reference points, blended with humour and self-depravation; Sheepy are clearly enjoying themselves... Sheepy have crafted a melodic, hook laden classic – a slice of real independence, so adverse and unconcerned as to what is current, to what is gracing the pages of the NME."
- Louder than War


"Earworm pop hooks with a vaguely sinister and cynical lyrical edge, Sheepy are reminiscent of classic guitar groups such as The Replacements, Super Furry Animals and Pixies. Once a solo project now bedecked by a fully-functioning three-piece line up, Sheepy prove themselves impossible to ignore and bounce along to."
- Getintothis 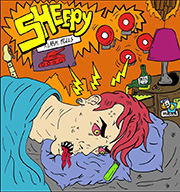