Jenny Don't and the Spurs are internationally known western rebel cowboy punks from the legendary and influential rock and roll underground of Portland, Oregon.

While the sound of the Spurs is original and draws from deep wells of personal experience, the band pays stylistic homage to the greats of the genre – Patsy Cline, Ernest Tubb, Hank Williams Sr., Loretta Lynne, and all the rest of the real players from the 1940s and 50s - an era where the lines between Rock’n’Roll and Country were blurred, where the likes of Elvis Presley, Johnny Cash, and Carl Perkins could tour together and nobody would bat an eye.

Even with a new lineup, after countless shows in the U.S., Europe and Australia, and three albums, the intensity and energy of their live set is a must for anyone who likes spirited, garage-inspired country music played with sincerity and conviction.

"'I like everything but country.' It's the eternal refrain of high schoolers and idiots nationwide (don't even get me started on high-school idiots). But there's hope for the kids yet. Enter Jenny Don't and the Spurs. Backed by notable Portland musicians—Kelly Halliburton (Pierced Arrows), Sam Henry (Wipers, the Rats) and JT Halmfilst (a jillion bands)—Ms. Don't, who previously played with Henry in the band bearing her surname, has released an album of 10 punky country hits that will blow the minds of those who only know the genre through Auto-Tuned CMT fare. The songs run the gamut from the lilting waltz of "Carry Me Home" to the garagey lurch of "Hot as a Desert," but are all grounded by a similar theme."
- Willamette Week

"A band that boasts the ranks of Portland musical royalty (the Wipers' Sam Henry and Pierced Arrows' Kelly Halliburton) issuing its debut full-length would be noteworthy enough as is. But Jenny Don't and the Spurs, whose self-titled album sees its release at tonight's show, will win you over even before you flip the jacket to look at the musician credits. Playing vintage country and western straight out of the lonesomest corners of mid-20th century America, Don't and her cohorts sound nothing like a museum piece; rather, there's grit, sadness, and an edge of danger to these rumbling-boxcar country songs. "
- The Portland Mercury

"The Spurs are as on-point as a backing band can be, with a furious rhythm section and a tastefully eloquent slide guitar. While Jenny's voice would be at home with many of the indie bands in their native Portland, there's only one type of song it's meant for: cracking open that first PBR at the honky tonk. The band never slips into irony here: Jenny's heartbreaks and triumph are pure, filtered through the requisite veneer of propriety and sincerity of a 60s country singer flirting with a possible step over the line into outlaw music. Remarkably, it works. Jenny Don't and the Spurs proves that country is only as dead as we let it be."
- Nodepression.com

Jenny Don’t and the Spurs – Call Of The Road 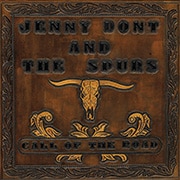 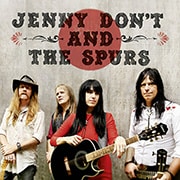 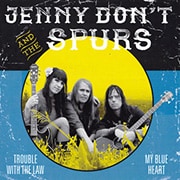 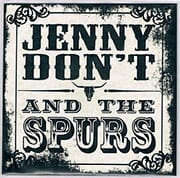